The data that makes up the Australian Stock Market History published on this site comprises discrete annual returns of the stock accumulation index, stock price index, Australian Government 10 year bonds, and inflation values in each December from 1883 to 2018.

Brailsford et al (2012) added to their previous work by expanding their stock market series to 2010. They expanded their series by:

Bond Returns: Setting the 2006-2010 annual values equal to the yield at the end of each December. The data was sourced from the RBA website.

Inflation: Setting the 2006-2010 value equal to the December year end values of the ‘CPI All Groups Weighted Average of Eight Capital Cities’ for the respective years. The data was sourced from the ABS.

A schematic of the Brailsford et al. (2012) data aggregation can be seen below. 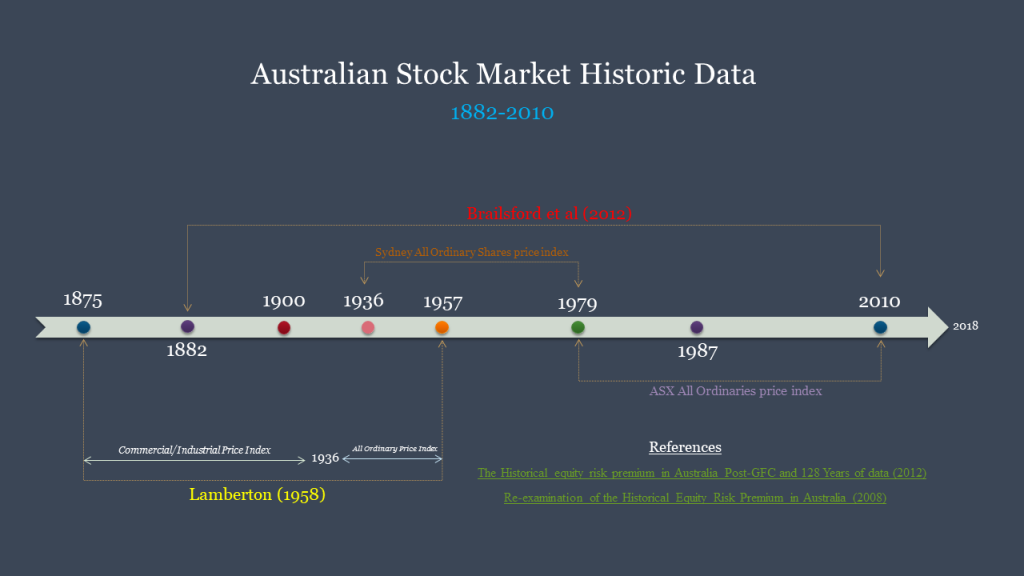 The data published on this site further expands on the Brailsford et al. (2012) data series.

Specifically, the data series was expanded by:

Bond Returns: Setting the 2011-2018 annual values equal to the Australian Government 10 year bond yield at the end of each December. The data was sourced from the Capital Market Yields – Government Bonds – Monthly – F2.1 data series on the RBA’s website.